Among the haberdashery and needlework-tools my grandmother left me, I always have cherrished some cute embroidery-patterns, obviously from times-bygone, since they are folded, fumbled and worn. Mignon-series of the french firm Rouyer. By the way Mignons means cute - looking at these booklets I know why..... 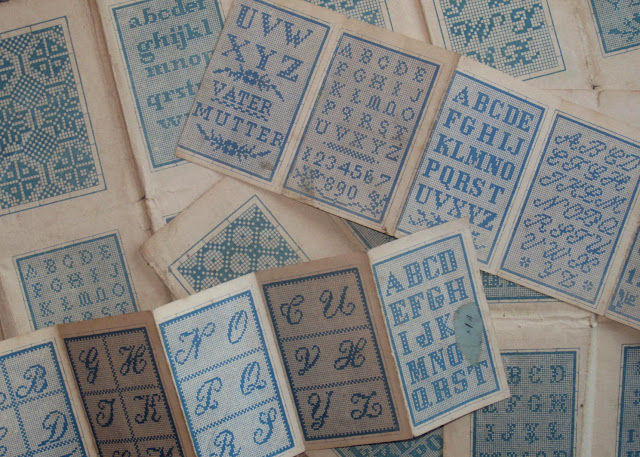 The patterns consist of folded pages with alphabets, some series of numbers, small motifs and - appropriate for every child: the words ‘souvenir’, ‘vater’ and ‘mutter’. The smallest pages measure only 7.9 by 4.9 cm and belong to the Mignon-series of the french firm Alexandre Rouyer. Mignon, by the way, means cute...

The firm Rouyer was one of the three French firms that dominated the ebb
roidery-world in the nineteenth century: Sajou, N. Alexandre-Lejeunesse en Rouyer. Sajou was the most important one with a production of far over a million embroidery patterns. The firm didn’t date its product. From some we know that Sajou exhibited its product in the Palais de l’Industrie in Paris at the Exposition universelle [d’art et d’industie] in 1867, and others on similar exhibitions in for example Vienna in 1873. These exhibitions were a kind of competition and the Sajou-booklets were often rewarded with medals and praise for being ‘exquisit’ examples that affect ‘good taste in a most prosperous way’.

These fine booklets, either by Sajou or the others, are interesting in more than one way.Not only are they a source of inspiration for nowadays embroiderer, but foremost they are tiny pieces of cultural heritage. Heritage that reveals customs and practices of daily life at the end of the 19th, beginning of the 20th century.
As said, Sajou was the most important one. In Germany, at the beginning of the 19th century a manufacturer of engravings Ludwig Wilhelm Wittich, had the brilliant idea to print engraved grids on paper on which cross stich embroidery patterns could be painted with gouache.

And while in Germany ‘Berlin-work became extremely popular, in Paris the 33 year old Jacques Simon Sajou opened the first needlework shop of France in 1838. And it was popular. But when important ladies like queen Marie-Amélie Ferdinand-des-deux- Sicilies  - wife of king Louis Philippe I of Orléans - bought her haberdashery at the shop business was booming. Two years later he opened a workshop at the Rue des Anglaises 20, organized according to the rules and regulations of its time. All employees lived permanently at the factory. The children of employees learned to read, write and calculate when they were 10 years old. And of course they got sewing lessons. Twice a week catechesis was taught and no contact with the other world was allowed. But when they left Sajou they were educated with such standards and morals that they would make perfects wives and mothers.

In no time Sajou produced 15.000 to 16.000 patterns, varying in size between 10 and 80 cm. His biggest product was an embroidery pattern with the Sorrows of Maria represented in emblems of 4 metres, designed by Eugene Hagnaüer and embroidered by madame Pessiere, which he exhibited in 1855.
Sajou understood as no other that he had to come up with something new to keep business flourishing. In 1849 he also participated in several magazines and after two years he started his own: Le Guide Sajou, Seul Journal Complet des Ouvrages de Dames, pour Tricot, Broderie, Filet, Tapisserie, Crochet, Frivolité, Etc., which came out monthly. After some years Sajou choose to put an end to Le Guide, but only to collaborate with ‘Le moniteur des dames et des Demoiselles’, edited in Parijs and Brussels and which therefore had a much larger distribution area. Sajou made it possible for its subscribers to come to the store every Tuesday: they could ask questions or follow lessons. Subscribers from the county could write letters and order their haberdashery. All very custom friendly and a bit shrewd.
In 1855 Sajou employed somewhere between 200 and 300 people and published more than a million patterns. The founder dies in 1882 and the firm stays in business until 1952. How many pattern booklets were sold cannot even be guessed. Every pattern booklet by Sajou contains between three to eight alphabets. Most of them are printed in blue, at that time due to the recent invention of blueprinting with cyanotype, an easy and cheap way to make photographic copy prints. Sajou patterns in two or more colours are must more rare.
Sajou was undisputed the biggest publisher. Maison N. Alexandre-Lajeunesse, opgericht in 1862 only published two kinds of patterns: booklets with four to eight pages and hard cover manuals in which you can also find patterns. Alexandre-Lajeunesse published blue, as well as full colour patterns.
Alexandre Rouyer, the editor of my grandma’s patterns, was not as important as Sajou, but more important in the business than Alexandre-Lejeunesse. He revived the family-factury, located in the Parisien quarter Le Marais. Rouyer designed cloth, various fashion accessories and made ‘toile cirée’. In 1886 he started selling sewing machines, and next to this all, he also commenced publishing. His ‘cahier d’alphabet’, albums with crochet patterns, white work examples and tapisserie-embroidery were an immediate  hit and Rouyer became a brand to remember - not the least due to the fact that the firm was the first to use advertisements on for example the cover of the leporello books. Rouyer summed up what he sold and owned: Dessins de Broderies sur Tissu en tous genres (embroidery patterns), a workshop for lingery, a factory for lace and braid work. In  1876 he even opened a shop in haberdashery at the Rue Saint-Denis 120. Alexandre Rouyen was a busy man. After the death of Alexandre Rouyer in 1881, there were various successors, until 1909 when ‘la Maison Rouyen’ finally closed.
The designs of Rouyer are very cute. They include, besides alphabets, small scenic designs, some fruit, floral and animal designs, but also repeating allover patterns; borders; as well as some small samplers and phrases. The patterns were mostly printed in blue, but sometimes also in brown, or even in orange, blue and brown. Mignons, from the miniature series, is the smallest series Rouyer made, the Alphabeths de broderie with 24 x 15,5 the largest.A lot of them were reprinted, for they where very popular. The Mignonseries, for example, was reprinted until 1898 when James Weill led the company.

My grandmother was born in 1902. I just don’t if her patterns are a reprint from the beginning of the 20th century, or that perhaps the materials belong to her mother. This is not unthinkable. My great grandmother was educated at a French boarding school as was ‘bon ton’ with the upper middle and upper class in those days and learned her needlework very well. She married a jeweler, who travelled a lot. Not only for fun, but also for business. I know he visited these large industrial and commerce exhibition abroad for inspiration and trade. Who knows, maybe he bought his wife a little present...
As said, I love these old patterns `cause they are part of the family tradition. Knowing so many hands used them and made lovely things with them, simply feels good. I also, sometimes use them for some embroidery work. Since I think a lot of ladies would love them I'm working on leporello-booklet with the patterns in it, which would make a lovely present, or just a fine thing to have. I'll keep you posted when they are available. 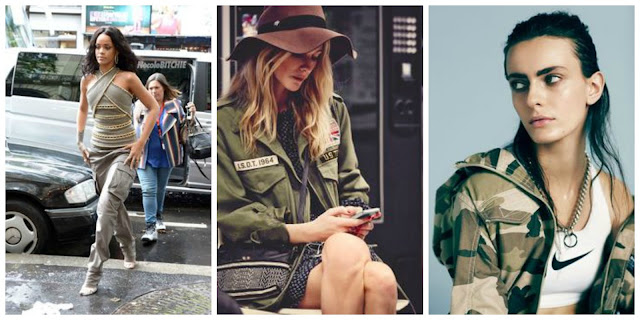